The Key to a Healthy Pond & Lake

We’ve all seen it and smelled it! The unsightly algae bloom that covers your once pristine pond is back with a vengeance. Not only does the slimy, greenish-brown substance hurt the eyes and nose, but the algae is also compromising the water quality for both fish and irrigation use. As algae grows, it accumulates closer and closer to the surface to gather sunlight. As a result, the lower depths are shaded leaving the first few feet of water deficient in oxygen production. So what can be done to add oxygen while at the same time ridding yourself of unwanted growth in an eco-friendly, efficient, and effective way?

How Does a Pond Absorb Oxygen?

Every pond is a unique ecosystem with its own unique characteristics. But the one critical element for the health of all ponds and lakes (and life on Earth) is oxygen. Most living organisms consume oxygen to survive, including aquatic species.

In ponds and lakes, the primary source of oxygen is introduced from two sources, photosynthesis and from the air by the means of diffusion. 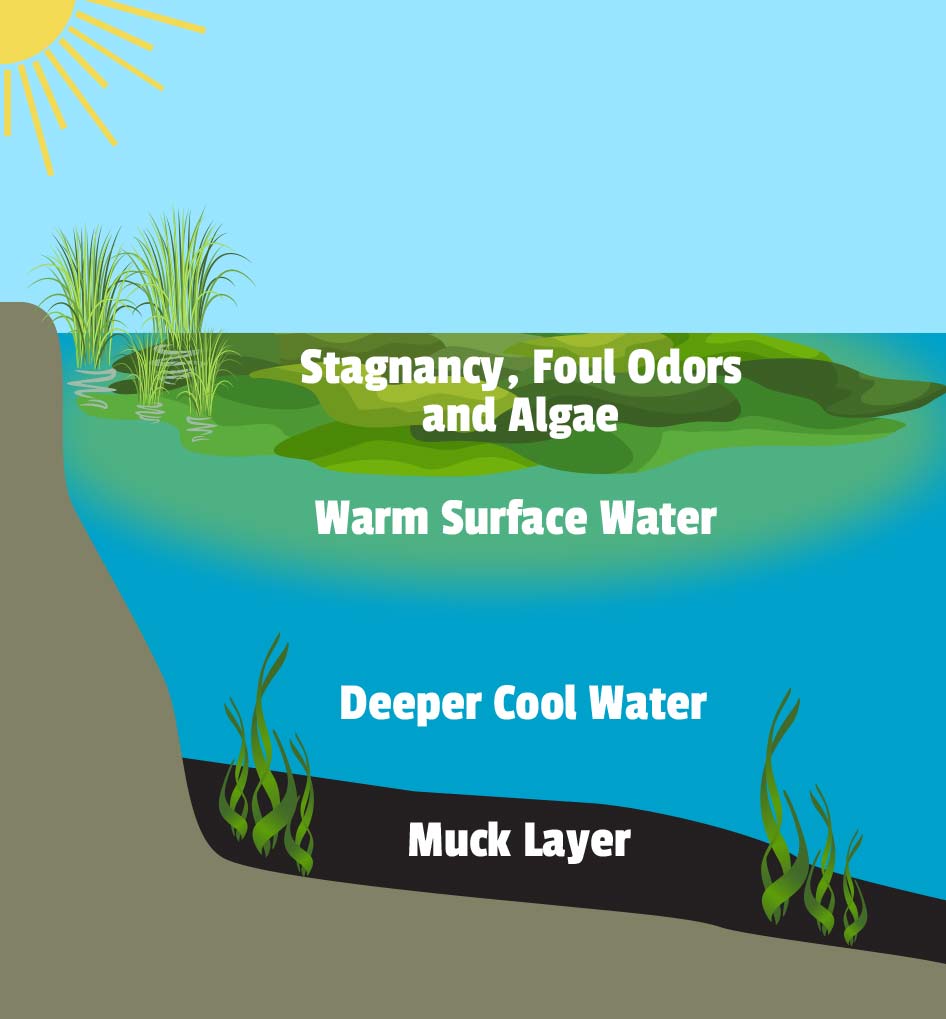 What Happens to a Pond with Low Levels of Oxygen?

The levels of oxygen from pond to pond, even on the same property, can vary greatly. When oxygen depletion occurs, it will lead to stagnancy, foul odors, algae, and fish kills.

Most issues with lower oxygen levels occur in the summer months, as the warmer water holds less oxygen, yet the ecosystem of the pond requires more as aquatic organisms grow and multiply. Nitrites, ammonia, and carbon dioxide that drain into a pond or lake from lawn fertilizers and other sources can also deplete the volume of oxygen.

On a bright, sunny day, plants are adding oxygen to the pond as a by-product of photosynthesis. After sunset, the oxygen is not being produced, yet the plants and fish in the pond continue to deplete the oxygen levels. Quite often a desirable balance between oxygen production and oxygen depletion cannot be achieved without some assistance, and if left unchecked, the oxygen level can drop low enough to stress or even kill fish.

Why Does Stratification Occur?

Over the course of a summers’ day, the oxygen levels in any given pond may vary, but typically the concentration is highest in the latter part of the afternoon, and the oxygen concentration is lowest just prior to sunrise. Most issues with oxygen depletion occur starting in the late spring, continuing until October. This is a stressful time of year for a pond, as the respiration rates of the aquatic life increase as the water warms, and the oxygen is depleted more rapidly.

One of the leading obstacles to the diffusion of oxygen into the water is stratification. In the summer the surface water of your pond absorbs more heat, which in turn creates a layer of warmer water floating over a deeper layer of cooler water. The warm and cool layers do not mix, thus the circulation of oxygenated water from the surface of the pond to the bottom of the pond no longer occurs.

When the pond bottom is void of the circulation of oxygenated water, nutrient build-up occurs and the sediment, debris, and nutrients fall to the bottom and build a “muck” layer. This muck build-up creates a toxic environment that causes algae blooms, excessive weed growth, and eventually fish kills. 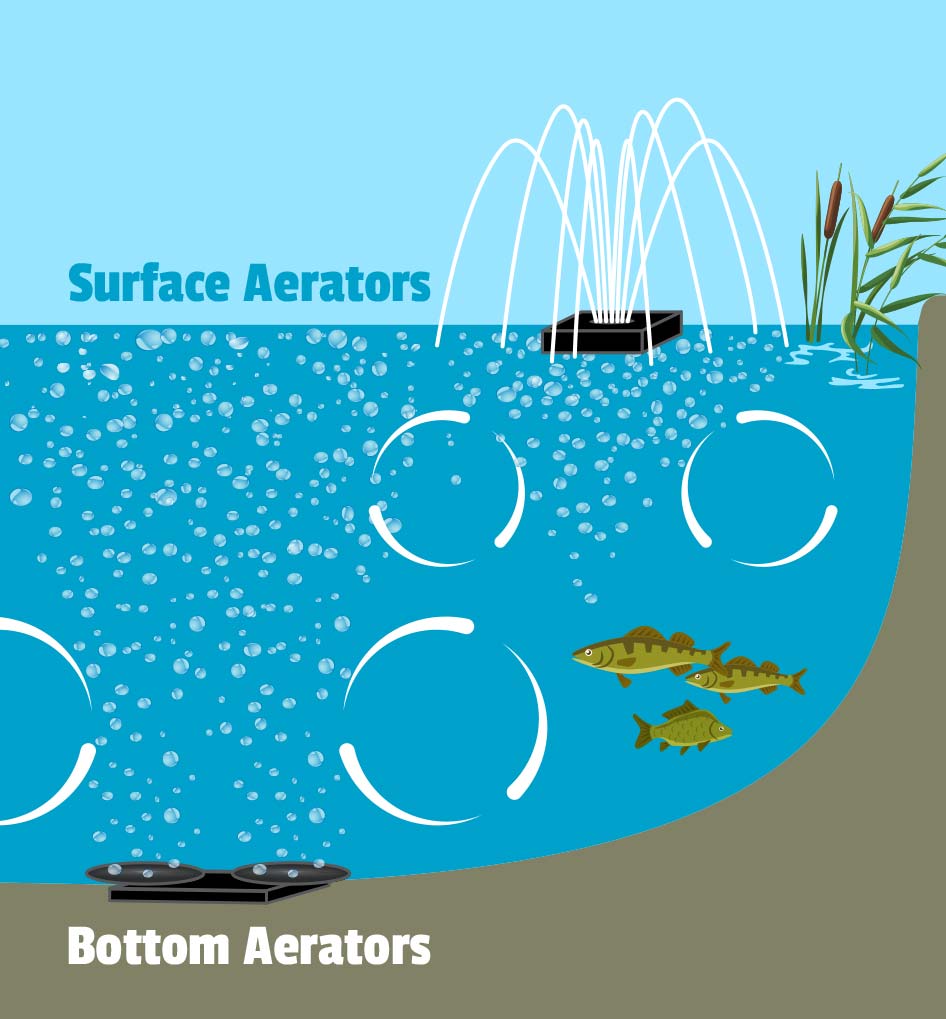 Aeration for a Healthy Pond

Enhance the natural beauty of your pond and restore water quality by adding a water aeration system that can infuse oxygen and help lend Mother Nature a hand. Pond aerators and fountains add oxygen in an eco-friendly yet cost and time-effective way.

Pond aeration can reduce the amount of pond algae by mixing and pushing algae out and limiting exposure to valuable sunlight. Higher dissolved oxygen levels reduce the likelihood that harmful blue-green algae will be able to take hold. Pond aeration helps reduce phosphorus levels in ponds. Once phosphorus is introduced into a pond, it is hard to remove and creates a welcoming environment for algae growth. Aeration promotes an oxidation reaction that binds phosphorous with iron which then falls to the bottom sediment and is unavailable for use for plant and algae growth if pond oxygenation is maintained.

Aeration can also break down unwanted bacteria and help with mosquito problems.

Although many variations in the types of aeration systems are available, most can be classified as either surface or bottom aeration.

Fountains, display aerators (like the DA-20), and agitators are all considered to be surface aeration systems. These work by pumping water into the air, and as the water falls back to the pond’s surface, it captures oxygen molecules from the atmosphere, which are mixed through the body of water. The agitated water movement not only works to disperse the oxygen but also assists in creating a strong surface current that moves floating algae and debris to the water’s edge for easier clean-up. These types of aeration system can also assist in mixing the layers of warm and cooler water in a pond during the summer months, as they are generally designed to pull water up from the deeper levels which in turn is dropped onto and mixed with the warmer surface water.

The surface aerator, with many display patterns available, is generally an aesthetically pleasing addition to the pond. Even though costs can vary considerably depending on size and style, there are many options available on the market for even the most modest budget. Installation is quite simple and can take less than a couple of hours.

Also known as sub-surface aerators, bottom aerators vary in style and design, but most function using the same principle of releasing air through a diffuser near the bottom of the pond. The advantage of bottom aeration over surface aeration is the ability to add oxygen thru the entire water column, however, this style of aerator does very little to create surface current or water dispersion to move algae. Care should be taken when utilizing a bottom aerator to avoid plants growing at the bottom of the pond, as these can block the flow of oxygen and require removal and cleaning of the unit.